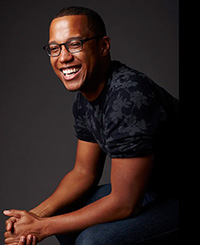 Branden Jacobs-Jenkins was born in Washington, D.C. and raised by his mother, Patricia Jacobs, who was a Harvard graduate and lawyer. He graduated high school as Valedictorian and went on to study Anthropology at Princeton University from which he graduated in 2006. In 2007, he earned a Masters in Performance Studies from NYU. That same year he started work in the New Yorker's fiction department as an editorial assistant. It was during this time he wrote his first play Neighbors. In 2010 he quit his job and moved to Berlin through the Fulbright Fellowship Program. While in Germany, he wrote his next plays An Octoroon and Appropriate along with the start of Gloria. Jacobs-Jenkins returned to the U.S. in 2012 to study at Juilliard's Lilia Acheson Wallace Playwrights program. During this time, he also worked at: NYU as an adjunct professor, Baryshnikov Arts Center where he had a residency, Signature Theatre’s Residency program where he also had a playwright residency, as well as various teaching positions at Princeton and the Yale School of Drama. He won the 2014 Obie Award for Best New American Play for his plays Appropriate and An Octoroon. His plays Gloria and Everybody were finalists for the 2016 and 2018 Pulitzer Prize for Drama respectively. He was named a MacArthur Fellow for 2016.