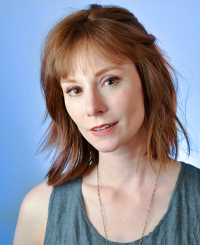 PCPA (since 2018): Actor: Maria, The Sound of Music; The Baker’s Wife, Into the Woods; Mrs. Darling/Grown-Up Wendy, Peter Pan; Viola de Lesseps, Shakespeare in Love; Sibella, A Gentleman’s Guide to Love & Murder; Gwendolen, The Importance of Being Earnest ; Portia, Julius Caesar; Director: As You Like It (Marian Theatre), The Cake, The Agitators, The Thanksgiving Play (InterPlay Series), Hamlet; or the Fall of 9 Sparrows (Conservatory)

My philosophy and goal as an educator, as well as a professional theatre artist, can perhaps be best illustrated by considering the slight but significant gap that lies between the words comprehend and apprehend. To comprehend is to “grasp with the mind,” “to perceive” or “understand the nature of” something. To offer and to attain comprehension is certainly a noble pursuit for any teacher-student or actor-audience relationship. But to apprehend is to “take possession of,” “to intuitively understand,” or “to have in one’s custody.” Simply put, apprehending involves grasping something strongly with both hands and hanging on to it. Apprehension is physical, instinctual, intellectual, occasionally frightening, and results in a kind of ownership. It is what I strive to give my students and what I aim for in my own work.

As a professional actress and theatre artist for 15 years, having worked in venues from Broadway houses to site-specific Guerilla Theatre, to film, television, voice-over and commercials, I have apprehended a practical understanding of what it takes to be a working theatre professional. And in my experience, this intangible thing called “talent” that we fixate on so often in our field is revealed, not in the way we perform, but in the way we work. My teaching methodology is guided by the core belief that it is not solely “what you learn” but rather “how you learn.” The primary ingredient of this “how” must be rooted in a dynamic and practiced curiosity.

This cultivated curiosity is particularly necessary and potent when it comes to the exploration of Shakespeare. I believe that Shakespeare is the ultimate workout for the actor – demanding every aspect of a performer: the body, mind, voice, and spirit – the perfect theatrical gym. Simultaneously, it is also the ultimate playground. Once an actor apprehends the core structure of Shakespeare’s writing and the opportunities the rhetorical and rhythmic structure provides, the verse becomes an incredible playground for deep, nuanced, playful and excited explorations and performances.