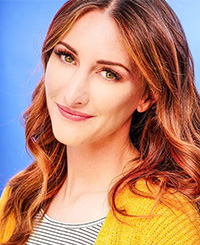 Bio: Lesley McKinnell has performed in shows from Carnegie Hall with her Children’s Chorus growing up to two National Tours of WICKED (u/s Glinda & Nessarose) and the original Broadway touring cast of A GENTLEMAN’S GUIDE TO LOVE & MURDER (Miss Barley, u/s Sibella & Phoebe). She has also performed in Guam & Times Square in NYC with the USO Show Troupe and on Disney’s MAGIC Cruise Line as a Broadway Guest Artist (TANGLED, Mother Gothel & TWICE CHARMED, Lady Tremaine), to other such exotic places as Maine (BARBRA STREISAND TRIBUTE, portraying Barbra Streisand) and North Carolina (GUYS & DOLLS, Adelaide). In Los Angeles, Lesley performed in many UNAUTHORIZED MUSICAL PARODIES at the former Rockwell Table & Stage (HOME ALONE, JURASSIC PARK, CLUELESS, EDWARD SCISSORHANDS, etc.) and was the closing day Elsa in FROZEN LIVE AT THE HYPERION where she had performed that role full time for two years. Not to mention one of Lesley’s favorite and MOST cherished experiences: MY FAIRYTALE @yours truly, PCPA! She is beyond ELATED to be back @PCPA- words could never fully express her gratitude for this opportunity. Deepest thanks to the entire creative team for this chance and to all those who truly supported her these last three years, especially. You know who you are :)